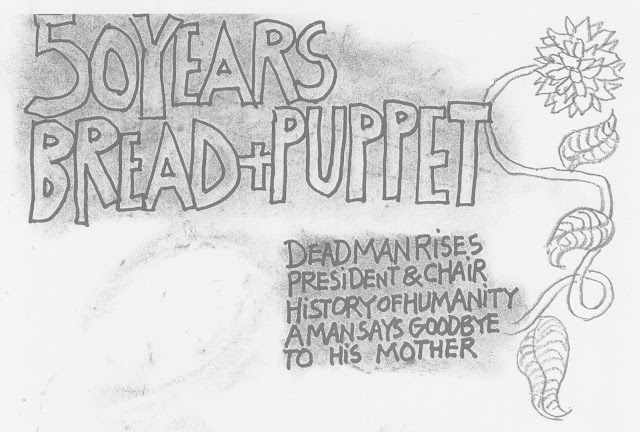 Our dear friends, BREAD AND PUPPET THEATER are coming to Cleveland and will be performing "50 Years of Bread & Puppet" which includes five revived old shows from years gone by.
This is a special event not to be missed!

Performed by a company of 5 puppeteers, "50 Years of Bread & Puppet: Dead Man Rises and Other Short Shows" is a series of four short shows that span the fifty years that Bread & Puppet Theater has been in existence.  Dead Man Rises was first performed at Columbia University in 1968 during the student occupation.  President and Chair was created in 1982 and is a ridiculous puppet show which makes fun of puppet shows and election campaigns.  A more recent show created around 2000 is History of Humanity that is short and lively and has been performed many times over the years in many places all over the world.  And finally A Man Says Goodbye to His Mother originally created & performed during the Vietnam War Era. 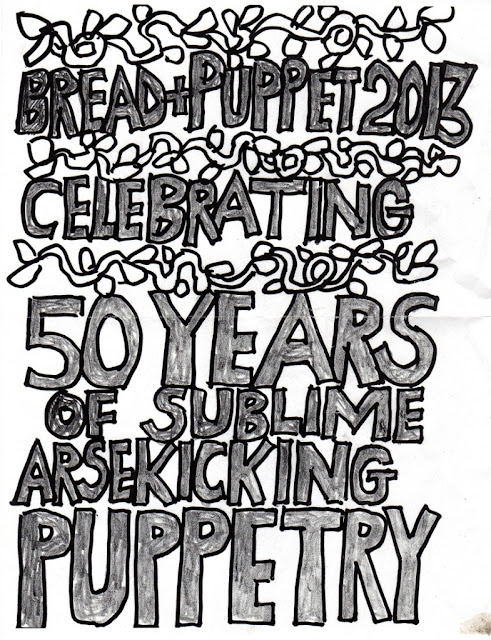 The Bread and Puppet Theater was founded in 1963 by Peter Schumann on New York City’s Lower East Side. Besides rod-puppet and hand puppet shows for children, the concerns of the first productions were rents, rats, police, and other problems of the neighborhood. More complex theater pieces followed, in which sculpture, music, dance and language were equal partners. The puppets grew bigger and bigger. Annual presentations for Christmas, Easter, Thanksgiving and Memorial Day often included children and adults from the community as participants. Many performances were done in the street. During the Vietnam War, Bread and puppet staged block-long processions and pageants involving hundreds of people.


In 1974 Bread and Puppet moved to a farm in Glover in the Northeast Kingdom of Vermont. The 140-year old hay barn was transformed into a museum for veteran puppets. Our Domestic Resurrection Circus, a two day outdoor festival of puppetry shows, was presented annually through 1998.
The company makes its income from touring new and old productions both on the American continent and abroad, and from sales of Bread and Puppet Press’ posters and publications. The traveling puppet shows range from tightly composed theater pieces presented by members of the company, to extensive outdoor pageants which require the participation of many volunteers.
Bread and Puppet is one of the oldest, nonprofit, self-supporting theatrical companies in the country.
www.breadandpuppet.org

“We believe in puppet theater as a wholesome and powerful language that can touch men and women and children alike, and we hope that our plays are true and are saying what has to be said, and that they add to your enjoyment and enlightment.”
–Peter Schumann

Posted by Possibilitarian Garden at 12:00 AM